Varalakshmi Pooja is an important pooja performed by many women in the states of Andra and Tamilnadu. This year Varalakshmi Viratham is on 20th Aug 2021.  It is dedicated to the Goddess, who is believed to have the combined powers of Ashta Lakshmi (the eight forms of the Goddess Lakshmi) the consort of Lord Vishnu.
Varalakshmi Pooja is celebrated on the friday, before the full moon day, in the Tamil Month Aavani/Aadi. Varalakshmi is yet another form of Lord Vishnu’s consort, Lakshmi, the goddess of wealth. Varalakshmi is believed to be the one who grants boons (Varam).

The Pooja can be performed any woman with no restriction of caste or creed. The legend of Varalakshmi Vratham is that Goddess Varalakshmi appeared in a woman devotee named Charumathi’s dream and expressed her satisfaction in the woman’s devotion towards the Goddess.

The Varalakshmi Puja is usually performed by those women who have inherited the tradition from their mother-in-law. Therefore, it a custom carried forward from one generation to the other. Those who perform Varalakshmi Vratam get the face of the Goddess sculpted in silver or any other metal. This is used year after year during the puja. 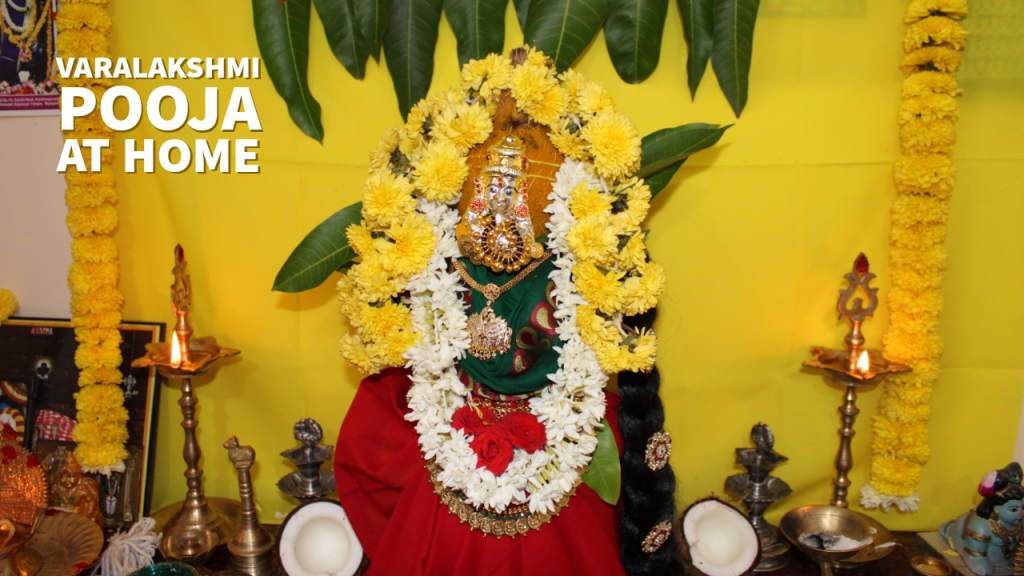 During this auspicious day, married women gets up early in the morning and decorate their front yards with rangolis. Later they take oil bath and wear new cloths and jewellery. Also they start preparing neivedhyam for the pooja and decorate the kalasam. Every women who has the ritual to perform this viratham will have the Varalakshmi face(Amman mugham) in Silver. As a conclusion to the festivities, they sing praises of the goddess and also invite another married woman to don the role of Lakshmi and offer them sweets. That evening, the neighbours are invited to the home and offered tamboolam. Together they sing hymns in praise of goddess Varalakshmi.

We need to ensure the following items to be kept ready before starting the pooja as it not advisable to get up in the middle of pooja.

Once the Neivedhyam and Deeparathanai is done, every women in the house including babies from 1 year should tie the nonbu saradu in their right hand. Generally, the elderly married women in the house ties the nonbu kayiru in her right hand with the help of her husband and she will in turn ties other nonbu kayiru to kanya(unmarried) girls at home. Everyone after they tie the knot in their hand ,they will pray to Varalakshmi godess to seek her blessings.

Check the below items for preparing as neiveidhyam

About Poornima 166 Articles
Hello Friends, I am Poornima Senthil Kumar an IT professional and mother of 2 little angels. My passion for cooking is endless and this blog and Cookingmypassion youtube channel is my dream. I post day to day recipes and also some famous and interesting recipes in my blog and my channel. I love to shoot food preparations videos and also love to capture an eye-catching and mouth-watering pics of my recipes. Me and my husband both love to cook new and innovative recipes. And I am blessed to get my hubby as a supportive and acting partner in our cooking videos. We both love cooking and tasting food as much as we love each other lol... Cooking healthy food, eating happily and staying active without any illness till the last breath is the way of my life. And I would be very happy to know my friends are too happy and healthy with my recipes. No rules, Don't be afraid to do whatever you want. Cooking doesn't have to have rules. I don't like it that way. - Masaharu Morimoto Thank you.