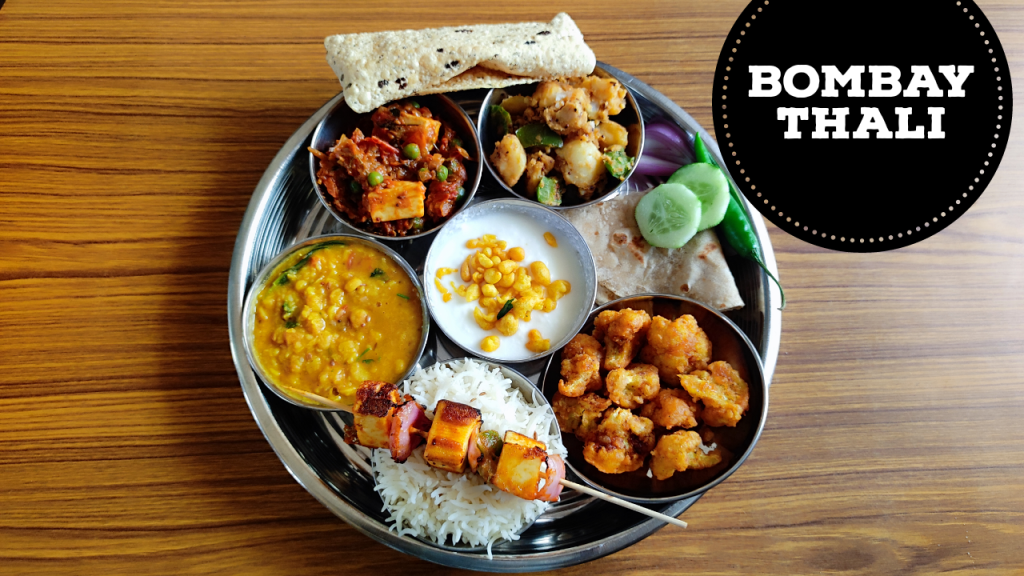 One of the best rice recipe is this simple jeera rice made with basmati rice, cumin and ghee. This rice is easy to make and it is flavored with ghee and cumin. Use a good quality basmati rice and make sure you soak the rice 20 mins before preparing. I have cooked in pressure cooker. Simply add the soaked rice in a container or directly in a cooker. Add 2 glass of water for 1 glass rice add ghee and allow to cook for 2 whistles. This jeera rice goes well with dal or with any spicy curries like Veg kofta balls curry , Meal maker curry , Dahi Gravy etc.

In this lunch menu I served panchmel dal and also matar paneer gravy which goes well for the jeera rice.

Panchmel dal is also called as Panchratna dal or dal panchmel. The word Panch means five and the Dal is for lentils in Hindi language.

The 5 lentils that are used in the panchmel dal recipe are:

Paneer Tikka is a popular and delicious tandoori snack where paneer (Indian cottage cheese cubes) are marinated in a spiced yogurt-based marinade, arranged on skewers and grilled in the oven / grill pan or barbecue grill. If you don’t have an oven, then instead of grilling in oven, you can make it on stovetop or tawa. It is best to marinate the paneer cubes for 2 hours or more. You can also keep the marinated paneer overnight in the fridge. I marinated the paneer and veggies for 2 hours in the refrigerator. The longer it marinates, the better flavors get infused into the paneer and veggies. While grilling or baking, the paneer cubes and veggies can become dry. Oil is added to paneer and veggie mixture to prevent this from happening.

The paneer cubes and veggies are also brushed with some oil to avoid them from becoming dry. While grilling in oven make sure the heat is on all the sides otherwise turn sides in between. Microwave oven you can use high rack to grill the paneer tikka. Here in this video let me show how to grill and get the smoky effect and flavor. Don’t overcook the paneer as they then become rubbery, dry and hard. The paneer should be soft, well cooked but also succulent. Serve the paneer tikka sprinkled with some chaat masala and lemon juice. Also serve mint chutney, onion slices and lemon wedges as sides.

This gravy can be paired with Jeera rice and also phulka roti. This spicy dry gravy is made with cooked potaotes and capsicum.

Check below video for making this spicy potato capsicum masala.

You can serve with any of the above paneer dishes. check the below video form making chilly panner gravy.

Gobi 65 is an excellent starter it is very crispy and spicy. check the below video for making this wonderful starter/ snacks recipe

North indian’s meal is always a combination of flavoured long-grained rice and traditional wheat or plain flour-based Indian flatbread.  I have particularly shared phulka or puffed roti, as it helps to balance the meal. it is lite, and can easily be served with any choice of curries. In some thali they serve poori and also chapathi. Phulka roti can be paired with dal fry or matar paneer gravy.
You can also check other poori varieties like Rajasthani masala poori, Bengali Luchi etc.

Additionaly i served with papad and boondi raita. Boondi raita is very simple to make. in the whisked thick curd add salt to taste add some spices and add generous amount of boondi. It tastes really good for roti or rice varieties. You can also serve pickle in this lunch menu. And I also served onion slices, cucumber slices, green chilly, lemon wedges etc.

About Poornima 182 Articles
Hello Friends, I am Poornima Senthil Kumar an IT professional and mother of 2 little angels. My passion for cooking is endless and this blog and Cookingmypassion youtube channel is my dream. I post day to day recipes and also some famous and interesting recipes in my blog and my channel. I love to shoot food preparations videos and also love to capture an eye-catching and mouth-watering pics of my recipes. Me and my husband both love to cook new and innovative recipes. And I am blessed to get my hubby as a supportive and acting partner in our cooking videos. We both love cooking and tasting food as much as we love each other lol... Cooking healthy food, eating happily and staying active without any illness till the last breath is the way of my life. And I would be very happy to know my friends are too happy and healthy with my recipes. No rules, Don't be afraid to do whatever you want. Cooking doesn't have to have rules. I don't like it that way. - Masaharu Morimoto Thank you.